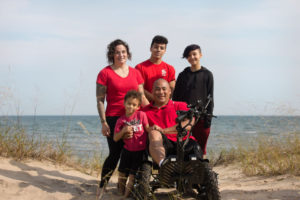 Bobby was born in an army hospital into a military family. The early years of his life were fraught with trauma, which led to Bobby and his sister to spending their pre-teen/teen years in a military orphanage. After graduating High School, he was accepted to Ferris State University where he studied Criminal Justice and played on the school’s rugby team.

Following the attacks on 9/11, Bobby was compelled to serve his country and joined the United States Army. In July of 2005 his unit was deployed to Habbiniyah, Iraq where he participated in grueling daily missions for 17 – 20 hours as an infantry soldier. While on a routine mission on February 12, 2006, his Humvee was stuck by a roadside bomb, blowing the door directly into his body. Bobby was medically evacuated stateside where he spent the next year rehabbing his left shoulder and undergoing 18 surgical procedures to save his leg.

Unfortunately, his body rejected the foreign materials and Bobby and was forced to make the arduous decision to move forward with an above the knee amputation of his left leg. On September 9, 2013 he was admitted to an amputee clinic where he was expected to spend three to five months in recovery and rehabilitation, his tenacity and determination allowed Bobby to walk out of the clinic, with a new prosthetic leg, after only seven weeks.

With the help of his wife Erin and his children, Bobby continues to fight and make amazing strides. Bobby is a certified peer support specialist, counseling other veterans and amputees with PTSD to help them overcome their obstacles. As part of his treatment, Bobby turned to the gym and found his new calling on the powerlifting platform, earning five national and two world records.

Bobby and his family currently live in Michigan in a home where stairs are dangerous obstacles, showering is a perilous task, and the absence of accessible features can lead to further injuries and daily difficulties.

Jared Allen’s Homes for Wounded Warriors is honored to collaborate with our national partners to design and build a 100% accessible, mortgage-free home that will ease the Body families’ daily challenges and allow Bobby to feel safe and secure.

Find the strength to be a champion

'I wasn’t going to allow it to defeat me,' says disabled veteran setting new powerlifting records

GFA 2015 – Bobby Body – Veteran of the Year
Bobby Body’s commitment to serve his country resulted in tours of duty with both the Marines and the Army.